No matter what we’re involved in, sooner or later, somebody will make a mistake. We might like to think we’re the exception but we too will do something that should have been handled differently, say something we shouldn’t have said, overlook something or someone we should have seen. Everybody makes mistakes, including you and me.

Life in the Church is no different. We are a group of diverse human beings coming together, though saved by grace, still human. That means we don’t know all, see all, and can’t do everything. The pastor will make mistakes. Ministry leaders will not get everything right. And, you and I will make mistakes too especially if we’re involved in ministry.

We do have access to a God who does know all, see all, and can do everything. We can learn the right way in His Word. We can pray for wisdom and strength. Yet, we’re all a work in progress (Phil. 3:12) so there will be times we might lean on our own understanding or on occasions we’ll plow forward without waiting on God.

Since Everybody Makes Mistakes, How About a Little Grace?

God, who makes no mistakes, being perfect in all He does, extends grace. And, we’re not talking about a little grace but rather grace upon grace (Jn. 1:16). Also, His grace extends to outright sin we commit against Him, not just minor lapses in judgment. 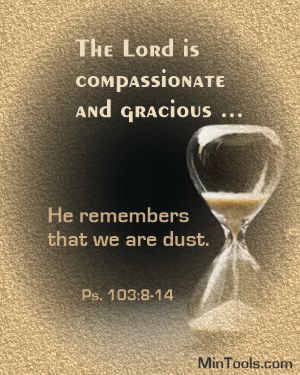 The LORD is compassionate and gracious, slow to anger, abounding in love. He will not always accuse, nor will he harbor his anger forever; he does not treat us as our sins deserve or repay us according to our iniquities. For as high as the heavens are above the earth, so great is his love for those who fear him; as far as the east is from the west, so far has he removed our transgressions from us. As a father has compassion on his children, so the LORD has compassion on those who fear him; for he knows how we are formed, he remembers that we are dust. (Ps. 103:8-14)

Many church conflicts and splits could have been avoided if people had just extended a little grace toward someone they perceived to have made a mistake. And, it would have been easier for people to exercise that grace had those at fault handled their mistakes with humility, grace, wisdom, and understanding.

Let’s all ask God to search our hearts (Ps. 139:23-24), whether or not we’re the person making the mistake, to see if we’re extending grace.

God sent Jesus “to seek and save the lost” (Lk. 19:10). The results of making outreach a priority, of making His mission our mission, are significant — the difference between life and death for those who put their trust in the One we proclaim. As we reach out with His heart for the lost, people gain a better understanding of His desire that everyone comes into a relationship with Him so they experience eternity with God rather than apart from Him (2 Pet. 3:9).

3 Results of Making Outreach a Priority

Therefore go and make disciples of all nations, baptizing them in the name of the Father and of the Son and of the Holy Spirit, and teaching them to obey everything I have commanded you. And surely I am with you always, to the very end of the age (Matt. 28:19-20)

2) Fellowship with those who become Jesus’ disciples is made possible.

We proclaim to you what we have seen and heard, so that you also may have fellowship with us. And our fellowship is with the Father and with his Son, Jesus Christ. (1 Jn. 1:3)

All this is for your benefit, so that the grace that is reaching more and more people may cause thanksgiving to overflow to the glory of God. (2 Cor. 4:15)

These results are listed in the Church Purpose Ministry Manual which looks at outreach as one of the ways we fulfill our purpose to love people. The manual also provides some questions to reflect on about your approach to outreach.

The United States celebrates working men and women on Labor Day. But, have you ever asked similar to King Solomon’s question in Ecclesiastes 1:3? — “What do people gain from all their labors at which they toil under the sun?” — Is there more to work than that paycheck? What if its something you don’t enjoy doing? People around you may not be the easiest to work with. Perhaps you’re unappreciated and underpaid with too many expectations. You’re on a treadmill, going through the same motions day after day with little reward. It may be difficult to even think about making an eternal difference in the workplace.

Perspective Needed to See your Job Like a Mission Field, Where You Work in Ways that Count for Eternity 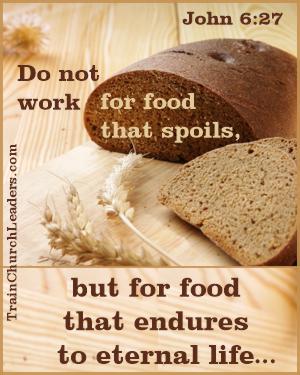 Jesus said, “Do not work for food that spoils, but for food that endures to eternal life, which the Son of Man will give you” (Jn. 6:27). Now, Jesus wasn’t saying we should all quit our jobs and “do ministry” but rather to live for Him wherever we are and in whatever we do. It isn’t an either/or proposition. We can work for that which “endures to eternal life” in our jobs if we see the workplace as our ministry, as our mission field.

With the changing landscape of the workplace of many working remotely from home, it may be more challenging to know how to purposefully let our light shine digitally, by phone, with less people contact, or socially-distanced. Certainly, however, God is capable of giving us the wisdom we need for how to live for Him in whatever situation we might find ourselves. He promises wisdom to those who ask (James 1:5).

Power Needed to Make an Eternal Difference in the Workplace

How easy it can be to gripe and complain about our jobs or the people with whom we work. Sometimes the stress of a job, or a boss, seems unbearable. Maybe you find it difficult to put in an honest day’s work from home with all the distractions.

Both our actions and attitudes, along with our words, help determine the kind of impact we have in the workplace so it’s vital that we rise above. The Apostle Paul said, “I have learned the secret of being content in any and every situation …” (Phil. 4:12) What was it that enabled him face hardships and persecution with grace? He continued with the answer. — “I can do all this through him who gives me strength.” (Phil. 4:13)

We need to take Jesus at His word when He says, “I am the vine; you are the branches. If you remain in me and I in you, you will bear much fruit; apart from me you can do nothing.” (Jn. 15:5)

Take a few moments for an honest assessment of whether you look to the Lord as the Source and Sustenance of all you need to make an eternal difference in the workplace.

With God’s help, it is possible to make an eternal difference!

For More Help: Labor Day and the Workplace Ministry Resources

One of the best ways churches can do their part to help the next generation learn about God is to equip parents to bring up their children “in the training and instruction of the Lord” (Eph. 6:4). But, let’s not end there. Let’s also equip grandparents in their role. Churches can help grandparents leave a positive legacy. 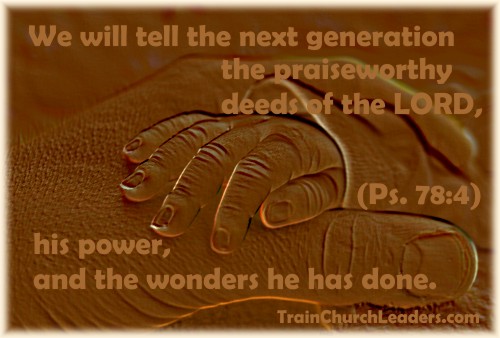 Churches, Help Grandparents Leave a Positive Legacy by Strategically Planning to Equip and Encourage Them

Go to: Resources on Grandparenting

The United States sets aside the first Sunday after Labor Day to honor grandparents — Grandparent’s Day. I have very few memories of my own grandparents as they all passed on when I was very young but one thing I do remember is that they were people to be respected in a special way. And, though I didn’t directly benefit from their input into my life, I have been indirectly affected because of their influence on my parents . . . the legacy my grandparents passed on through my parents.

The Kind of Legacy Passed on Through Grandparenting

Scripture makes it clear that grandparents pass on a legacy that can have either a positive or negative effect for generations to come (Ex. 34:6-7; Ps. 103:17). If you’re a grandparent, certainly you should want to be a blessing rather than a curse to your grandchildren. Certainly you should want them to honor you because of true appreciation and love for you, not because they’re told to be respectful. 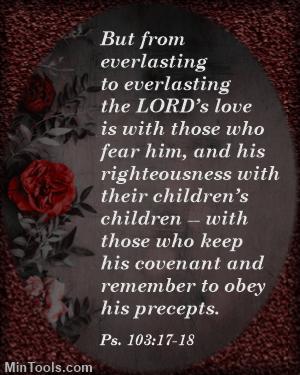 Positive Legacy? – The legacy of grandparents can be for eternal good as seen in the example of Timothy whose mother and grandmother passed on their faith by rooting him in God’s Word (2 Tim. 1:5; 3:14-17).

But from everlasting to everlasting the Lord’s love is with those who fear him, and his righteousness with their children’s children … (Ps. 103:17)

Or, Negative Impact? – A grandparent’s legacy can also have a negative impact as the effects of an unbelieving or hardened heart and a life of sin can spill over in familial dysfunction for years to come.

The Lord, the Lord, the compassionate and gracious God, … maintaining love to thousands, and forgiving wickedness, rebellion and sin. Yet he does not leave the guilty unpunished; he punishes the children and their children for the sin of the fathers to the third and fourth generation. (Ex. 34:6-7)

Take some time to ask the following questions. Pray about and reflect on what you can do for it to become more of a reality in your life.

Fellowship, koinonia, relates to sharing what we have in common, which is our life in Christ. God’s Word provides reasons we should prioritize such community with one another and it also gives results of making fellowship a priority.

1) We have unity among believers when we base it on what we have in common in Christ.

… if any common sharing (koinonia) in the Spirit … then make my joy complete by being like-minded, having the same love, being one in spirit and of one mind. (Phil. 2:1-2)

2) We develop gratitude and a genuine love and concern for one another that leads us to pray for them.

I thank my God every time I remember you. In all my prayers for all of you, I always pray with joy because of your partnership (koinonia) in the gospel … (Phil. 1:3-8)

3) That love for one another makes us a more effective witness to the world around us.

By this everyone will know that you are my disciples, if you love one another. (Jn. 13:35)

These results are listed in the Church Purpose Ministry Manual which looks at fellowship as one of the ways we fulfill our purpose to love people. The manual also provides some questions to reflect on about how you are doing at making fellowship a priority.

This website uses cookies to improve your experience while you navigate through the website. Out of these, the cookies that are categorized as necessary are stored on your browser as they are essential for the working of basic functionalities of the website. We also use third-party cookies that help us analyze and understand how you use this website. These cookies will be stored in your browser only with your consent. You also have the option to opt-out of these cookies. But opting out of some of these cookies may affect your browsing experience.
Necessary Always Enabled
Necessary cookies are absolutely essential for the website to function properly. This category only includes cookies that ensures basic functionalities and security features of the website. These cookies do not store any personal information.
Non-necessary
Any cookies that may not be particularly necessary for the website to function and is used specifically to collect user personal data via analytics, ads, other embedded contents are termed as non-necessary cookies. It is mandatory to procure user consent prior to running these cookies on your website.
SAVE & ACCEPT